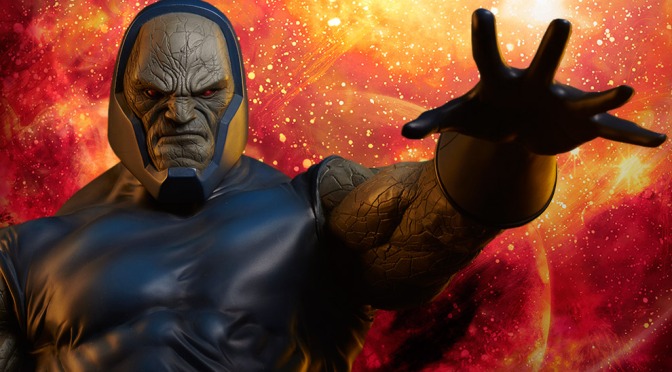 Darkseid was created by Jack Kirby for his New Gods series that aired in 1970. Darkseid is a god in Apokolips, controlling people eliminating the power of free will. Darkseid strength was able to go against Super-Man and The Holy Genesis. Darkseid rules with an iron fist over Apokolips. Even after being brutally beaten by Super-man and tossed down to his nation. The people mobbed around him looking like they we’re ready to attack. Instead Super-man exclaims, Darkseid is finish, you may do your will to him. Instead, they pick him up then carried him off into his kingdom. Only to halt his people, so he can tell Super-man that he is a god to his people. Darkseid has eyes that are melting to the flesh. No literally, he can stare at you and melt any human who stands in his way. Super-Man was almost killed because of Darkseid power. Instead, Super-man grabbed gravel off the ground then shoved it into Darkseid’s face until the room imploded from the two opposing power-forces.

Darkseid would be comparable to Madara. Both have special eye gifts that grant them unnatural abilities in their universes. Both characters have a will to control all of man kind. Believing that their control will make all of humanity better. The confidence inside of both characters come from many of hard battles. Darkseid battled against The New Genesis, waging war until a truce was finally called. Making alliance’s by exchanging their first born within their family heir. Madara has the same kind of method. Fight a bloody war until the last one victors out on top. The difference between the two, Madara’s intentions are completely passionate. With the loss of his little brother, Izuna , he lost all sanity. Both sides suffered causalities losing a family member of their own. Darkseid was purely ego, he wanted to rule all of the universes with his will. Darkseid is considered the God Of Evil in the DC Universe.